A two-day International Conference on Ancient Indian Wisdom Panacea for Sustainable Well-being was formally Inaugurated online today in SMS (Varanasi). Various scholars from the country and abroad participated in it. 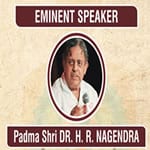 Addressing the inaugural session of the conference, Chief Guest of the function Dr. H.R. Nagendra, Chancellor of Swami Vivekananda Yoga Anusandhan Bengaluru, said that despite the development of the medical system in the present modern society, increasing mental stress, diabetes, and other diseases in the society are posing a big challenge for human beings.

Dr. Nagendra said that in such a situation, only following the path of Bhakti Yoga, Raja Yoga, Karma Yoga and Gyan Yoga as shown by Swami Vivekananda will prove helpful in addressing this menace. He said that today there is a decline in the traditional values ??in society. Families are breaking up, the number of divorces is increasing, the development factor of society is evaluated by the Financial Index. Rather, brotherhood, happiness, healthy environment are more important for society. He stressed on the holistic cure to mitigate this problem.  He further elaborated that having high health index is absolutely necessary for a healthy society. This will make India again the torchbearer for humanity-Vishwaguru. 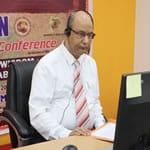 On this occasion, the Director of SMS, Prof. P.N. Jha welcoming the dignitaries explained the academic achievements of the institute, said that today the institute is ranked among the 50 top business management institutes of India. He further said that the ancient wisdom of India enables us to become spiritual in practical terms. Referring to religious texts, Vedas, Puranas, Mahabharata, Ramayana, etc. Prof. Jha emphasized the growing relevance of Ancient wisdom in enabling the modern global society to lead a protected and happier life during the present testing time and future as well. 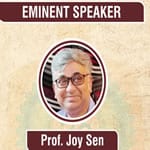 Taking the program forward, Prof. Joy Sen, Senior Scientist, IIT Kharagpur, speaking as the Guest of Honor, on the topic of “Science Behind Ancient Indian Tradition”, said that hundreds of attacks were made on Indian culture and religion by outside rulers, but it made Indian culture even stronger. He said that Indian Culture & Yoga are the cornerstones of Ancient Wisdom. Prof. Sen said that India has to further strengthen its old glory and spirituality. 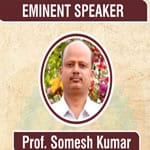 Next speaker, Prof. Somesh Kumar, Dean of Students Affairs and Prof. of Mathematics, IIT Kharagpur, speaking as the Guest of Honor, gave his deliberation on “Indian Origin of Modern Numerals and Decimal Place Value System”, said that India has played an important role in spreading knowledge all over the world and especially mathematics. Indias contribution to the field of science is phenomenal. He discussed Swami Vivekanandas lecture on zero delivered in Chicago, U.S. about 125 years ago. He said that modern science and technology would not have existed if the ancient Indian numerical and decimal systems were not there. 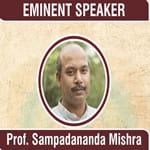 The last speaker of the session was Guest of Honor Prof. Sampadananda Mishra, from Rashtram School of Public Leadership, Rishihood University, Sonipat, who gave his discourse on “Culture and Scientific Relevance of Sanskrit. Prof. Mishra said that Sanskrit is a scientific and cultural language that is unique and different from other languages ??of the world. He threw light on its grammar and practical use.

On this occasion, souvenir and two books titled, “Ancient Indian Wisdom Panacea for Sustainable Well-being” and “Indian Traditional Wisdom Revisiting the Relevance” were released by the Director of the Institute, Prof. P.N. Jha, Registrar of the institution Shri Sanjay Gupta and other senior Faculties. Two technical sessions of the conference were also organized where many participants presented their research papers.

The program was conducted by Dr. Bhawna Singh and the convener of the conference, Dr. Amit Kishore Sinha, proposed a vote of thanks.

On this occasion, the executive secretary of the institute, Dr. M. P. Singh encouraged the organizers and participants of the program. 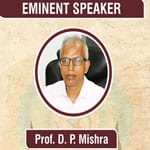 Speaking as the Chief Guest in the Valedictory Session of the two-day International Conference organized by School of Management Sciences, Prof. Debi Prasad Mishra, Director, NITTTR stressed the need to revisit our cultural roots and use nature inclusive technologies of earlier times while embracing the modern technology. He discussed a case in point the cracks appearing in Hirakud Dam spillways which has put surrounding ecosystem and millions of lives at risk and cited the example of kallanai dam built using traditional knowledge and wisdom during the Chola dynasty which is still standing and fully functional. 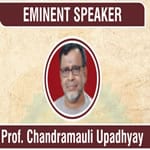 The Guest of Honour, Prof. Chandramauli Upadhyay, Professor, Faculty of S.V.D.V. Banaras Hindu University, Varanasi introduced Jyotish Vidya as a science before all sciences and said that it is like a source of light that illuminates the path of life. Prof. Upadhyay explained 16 sanskaras in life as indispensible and compared them beautifully to the actions of cloth weaver who collects cotton, coverts it into fibers, then threads and ultimately into beautiful clothes which adorn human body.

The Valedictory session started with the welcome and felicitation of the participants and guests by the Director of the Institute, Prof. P. N. Jha. He expressed his pleasure on successful conduct of the international conference on Ancient Indian Wisdom, imploring the attendees to learn and appreciate the ancient Indian texts as perennial sources of knowledge that should be used for personal, public welfare as well as societal well-being.

Earlier, the plenary session of the conference started with the deliberation of key-note speaker Prof. Kishor Patwardhan (Department of Kriya Sharir, Faculty of Ayurveda, Institute of Medical Sciences, Banaras Hindu University). Prof. Patwardhan emphasized that Ayurveda is interwoven in the social fabric of India. Prof. Patwardhan took the audience on the historical journey of Ayurveda through times highlighting the stark differences between classical holistic thinking of Ayurveda and reductionist thinking associated with modern medicine.

The second key-note speaker of the session, Prof. Laxmidhar Behara (Department of Electrical Engg., Indian Institute of Technology, Kanpur.) stressed the importance of reading, understanding and imbibing Bhagavad Gita and explained the process of rising through various levels of consciousness. Prof. Behara while explaining the concept of consciousness said that the experiences and the experiencer together make our identity and they have a potential to become one. Through examples from Bhagavad Gita Prof. Behara explained the Divine and Mundane levels of consciousness and how through a pure mind one can become a part of super consciousness and super soul.

The Plenary session was followed by a series of technical sessions for the day-2. The sessions included participants from India and abroad. Academicians, research scholars and students presented more than 40 research papers. The different sessions were chaired by Prof. A. P. Singh, Professor, Department of Business Management, IGNTU, Amarkantak, and Prof. Sandeep Singh, Professor, School of Management Sciences, Varanasi.